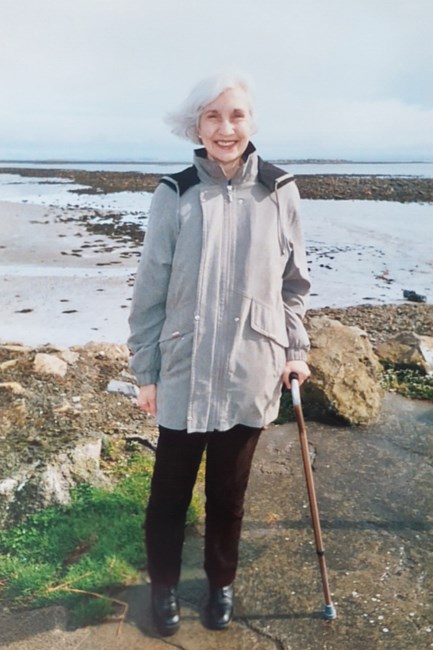 Joanne Prall of Arlington, MA died peacefully on Monday September 12 at the Sawtelle Hospice House. She was born in Albany, NY on April 7, 1941, the daughter of the late Joseph M. Prall and Evelyhn H Prall. She grew up in Albany, NY with her siblings Joseph, Timothy, and Michelle Prall, before moving out to San Francisco on her own in 1966. There she worked as a secretary and at a babysitting agency before becoming a certified medical assistant in 1969. On January 30, 1970 she married David Baughn and moved to Los Angeles. They would go on to have two children Eric Baughn and Heather Baughn (Phelps). In October 1979, after leaving a PTA meeting at Eric's school, both Joanne and Dave were hit by a drunk driver. Dave's injuries were not as serious, but it would take 10 surgeries and ten years of rehabilitation for Joanne to fully recover. She was driven to aid in changing drunk driving laws by co-heading up Californians For Sober Highways. In 1994 Joanne and Dave divorced and she moved back to the San Francisco area. There she went on to attend college, earned an Associates of Arts degree, and headed back into the workforce. In 2000 she began a new career in advocacy with the Council on Aging. After retiring from her role as a program planner for the aged, she moved to Arlington in 2017 to be closer to family, particularly her grandchildren, Niall and Cora Phelps. A memorial service will be held at the First Parish Church at 630 Massachusetts Ave, Arlington, MA 02476 on October 8th at 2 PM. In lieu of flowers, please donate to the First Parish Church in Arlington https://onrealm.org/FPUU/-/form/give/website or to the Sanborn Foundation http://www.sanbornfoundation.org/
See more See Less

In Memory Of JOANNE C PRALL