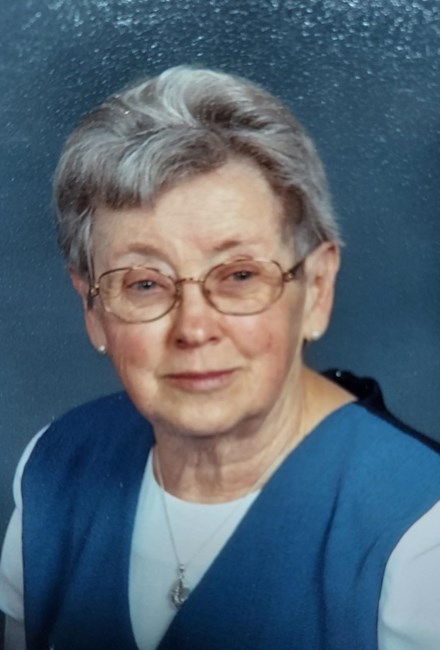 In Loving Memory of Callie Frances Wattenbarger 1930 - 2022 Callie Frances Wattenbarger, resident of Rainier WA, passed away peacefully, Sunday, February 20th, 2022, in her home with her loving daughter and nephew by her side. Callie was born August 28th, 1930, in McMinn County Tennessee to Arlie and Otto (Lockmiller) Newman. When asked what it was like growing-up during the depression, she would say, “We did not know we were depressed!” Her family owned and operated a dairy farm, and grew their own food, or traded at the local store. Times were tough, but their needs were met. Callie, in her youth, attended Tranquility Methodist Church in Athens, TN where she played the piano, sang in special groups or solo. She was very active in the Home Demonstration Club. As a Master Seamstress, she sewed beautiful clothes. She taught music in the Ten Mile school system in the early 60’s. She married Paul Wattenbarger in June of 1966 and came out west. Soon after they welcomed their daughter born in Salem, OR September 1969. Nine weeks later they moved to Washington state. Callie attended the First Baptist Church in Yelm for many years where she sang in the choir, then later played the piano. She was always ready to volunteer whether it be annually for VBS or monthly to make something delicious for potluck. She participated in senior activities, like day trips, kids craft days, Sunday school team teacher for the little children, team teacher for Girls in Action, and she helped feed the volunteers during the construction of the multipurpose building. Affectionately known as Miss Callie, she worked for Pamela Kitchen and later Wendy Baldwin for almost 40 years at the H&R Block location in Yelm. She did everything from front desk reception to, preparing income taxes, personal assistant, and whatever else was asked of her. She enjoyed walking in the Yelm Parade for H&R Block as well as riding in the truck waving and tossing candy! Callie attended lunch at the Rainier Senior Center most Monday and Wednesdays where she enjoyed the interaction with others. She volunteered to make and bring baked goods to their fundraisers, and always brought something to the potluck lunches. She enjoyed the nice weather when she could be outside tending to her flowers. Callie had many different varieties of flowers and plants over the years. She would frequently share her garden abundance with friends and family. Callie enjoyed listening to the birds, the sounds of her windchimes on the porch and the sounds of the hummingbirds who fed there beside them. One of her favorite memories was when while watering plants, with the hose, a hummingbird stopped and splashed in the water! She could NOT believe it! Callie was very creative and talented. To keep busy and create she would work on needle point, latch-hook rugs, crochet doilies and afghans, and knitted scarves over the years. When Covid began and masks were needed, she began looking through her scrap material, used an existing mask to make a pattern, and began sewing. She even took custom orders! She enjoyed many years of walking with her close friend Janis Benson out on the Fort Lewis reservation where they would talk and laugh for hours, they enjoyed trips to central WA to pick fruit and vegetables, and their exciting trip to Yellowstone National Park. She had many friends over the years. The “girls” would get together to celebrate birthdays, Christmas, as well as an annual tea party! She was proceeded in death on July 19, 1982, by her husband Paul Wattenbarger of Rainier, WA. And on May 3, 2020, by her brother Kenneth Newman of Athens, TN. She is survived by her daughter Feedie Wattenbarger of Graham, WA. Brother Charles (Charlotte) Newman. Nieces and nephews Jeannie (Joe)Knox, Vince (Jeannie) Newman, Jan (Tim) Stephens, from Athens, TN, Laura (John) Boyden from Atlanta, GA. Great nieces and nephews Ashley Knox from GA, Kayla (Colby) Thornton, Rachael (Derek) Johnson, McCall and Brock Newman from TN, and Anna and Cole Boydon from GA. Nephews and nieces Paul (Gwen) Wattenbarger, Irwin (Mikie) Wattenbarger from Salem, OR. Dennis (LaVonda) Wattenbarger from Lancaster, CA, Wanda Wattenbarger Garrison, KY. Great nieces and nephews Venus and Melissa Wattenbarger, Heidi (Chris) LaDue from OR, Christy (Douglas) Howard from KY, Brigitta, Katrina, Trenton (Julie), Katrina, and Darren of CA. Along with several great- great nieces and nephews in TN, OR, KY, and CA. She was loved by many and will be greatly missed. There is a new singer in Heavens Choir! A Memorial Celebration will be held Saturday, April 23rd at the Rainier Senior Center, 108 Michigan St S Rainier, WA Service begins at 11:30am, music and potluck to follow. In leu of flowers, please consider a donation to one of the following organizations that Callie supported throughout the years: St Jude Children’s Research Hospital Olympia Union Gospel Mission
See more See Less

In Memory Of Callie Frances Wattenbarger