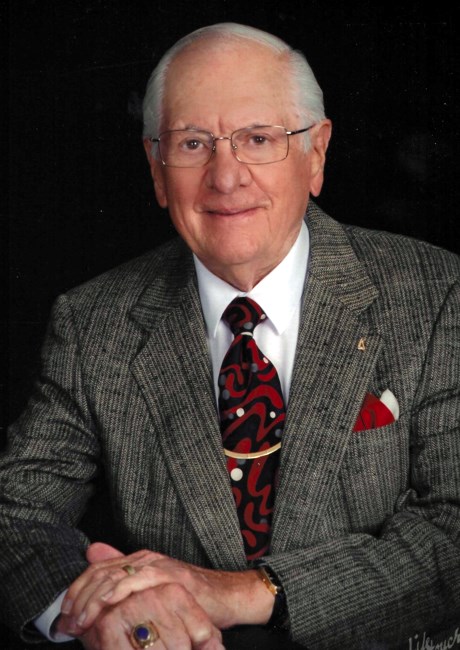 Harold passed away peacefully at home surrounded by his family on April 7, 2022, from complications due to a heart ailment. A memorial service for Harold will be held on Wednesday April 20, at 2 p.m. at Alamo Heights United Methodist Church, 825 Basse Road, San Antonio, TX, 78209. He was born on September 22, 1927, in Topeka, Kansas, as the son of Floyd B. and Aileen McPhail Burkhardt. He is preceded in death by his parents, his sister Jean Berry, his nephews Dana Berry and Kent and Bruce Luetje, his cousin Paul Larry Michaels, and by his first wife of 47 years, Myriam Louise Kelso Burkhardt, a loving wife and loving mother of their two daughters. He is survived by his beloved wife of 20 years, Patricia Fullingim Handy Burkhardt. He is also survived by his daughters Rebecca Louise Burkhardt and her partner Cynthia Goatley, and by Deanna Rochelle Weibel, her husband Robert J. Weibel, Jr, and their sons, his grandsons: Robert Jennings Weibel, III and his wife Caitlin, and Steven Dean Weibel and his wife Nicole, as well as Patricia’s children, Jonathan and Leah Handy and Glee Katherine Handy and her children, Jeremiah R. Wilson, and Jessica Glee Wilson. He is also survived by nieces Kaaren Jones, Sarah Weishaar (Tim) and Sharon Bayer; nephew, Kevin Berry (Vivian) and cousin Tesoro Gregory–-and many other kin as well. Harold finished High school in Corpus Christi in 1945 and received his Bachelor’s Degree from Southwestern University (Texas) in 1949; a Masters of Christian Education from Duke Divinity School in 1950; a Master of Theology at Perkins school of Theology, Southern Methodist University in 1956; a Masters in Health Care Administration, Trinity University (San Antonio), in 1984, and an honorary Doctorate of Divinity from Southwestern University in 1981. As a United Methodist clergy, he first served as associate pastor at Alamo Heights United Methodist Church from 1951 to 1954. During that time, he created their first Live Nativity Scene on the front lawn of the church on Broadway (including live animals!), which continued for 49 years and moved to the new church on Basse Road in 1993. After another seminary degree, he served as pastor of churches from 1956-1973 in Lytle, Kingsville, El Campo, and Brownsville; was involved in property acquisition and building programs in all four; and strengthened the ministry to youth in each congregation. He was President of the Methodist Mission Home (now Providence Place) in San Antonio from 1973-1994, and during those years, over 1800 babies were placed for adoption, and all birth mothers were nurtured as well. He created a second ministry at the Mission Home soon after he arrived in 1973, serving hundreds of hearing-impaired youth and guiding them to independent living. The Burkhardt Activity Center at the Mission Home was dedicated and named in his honor in 1994. He was active in state and national groups dealing with childcare and rehabilitation of handicapped persons In 1994 he was given a Resolution of Appreciation by the Southwest Texas Conference of the United Methodist Church for his work at the Mission Home, and in 2000 he was awarded the Servant Leadership Award by the Southwest Texas Conference of the UMC. During the years he was a member of the San Antonio Rotary Club, he was given the Paul Harris Fellow Award for service in the club and to others. He attended three International Rotary Convocations: with Myriam in Taipei, Taiwan, in 1994 and Nice, France, in 1995; and with Patricia in San Antonio in 2001. In February 2022, he was given the Distinguished Humanitarian Award by the Alumni Association of Southwestern University. He enjoyed playing his trumpet from Jr. High through college to 20 years in dance bands in San Antonio. He also loved his 1968 candy-apple-red Mustang convertible which he restored and owned for 37 years. He drove it in many parades and was active in the San Antonio Mustang Club, of which he was president in 2003. During his retirement, in the “Third Half” of his ministry (1994-96), he directed the financial campaign and served on the building committee to erect the “Methodist Center” on Huebner Road in San Antonio, where the Bishop and other church officials of the Methodist Church are officed. He served as interim pastor at First United Methodist Church in Corpus Christi, during 1996-97, his home church as a youth. During 2002-2014, he was back at Alamo Heights United Methodist Church as part time associate pastor working with senior adults, including the Thursday Lunch Bunch, the Church Foundation, and helping in pastoral duties. Harold organized three group trips to Israel and two trips tracing early Methodist history: one in England and one in the Southeastern United States. Harold‘s guidance, along with invaluable qualities of leadership, continued throughout his lifetime. His dedication, inspiration, enthusiasm along with his giving heart, passion and love for the Lord continued into his nineties. He was a mentor who inspired many young men and women to their call to serve God. He was a son, brother, husband, father, grandfather, uncle, pastor, and friend of many during his 94 years. Harold “Burky” was a gentle mover and shaker, a visionary… an innovator… always seeing opportunities to go forward with the newest ideas and creative thoughts. He was loved by everyone he met and will be missed. A memorial service for Harold will be held on Wednesday April 20, at 2 p.m. at Alamo Heights United Methodist Church, 825 Basse Road, San Antonio, TX, 78209. A reception will follow. The graveside service will be held in Pond Creek, Oklahoma at a later date. Donations may be made to the charity of your choice in Harold’s memory. Fond memories and expressions of sympathy may be shared at www.neptunesociety.com/location/san-antonio-cremation for the Burkhardt family.
See more See Less