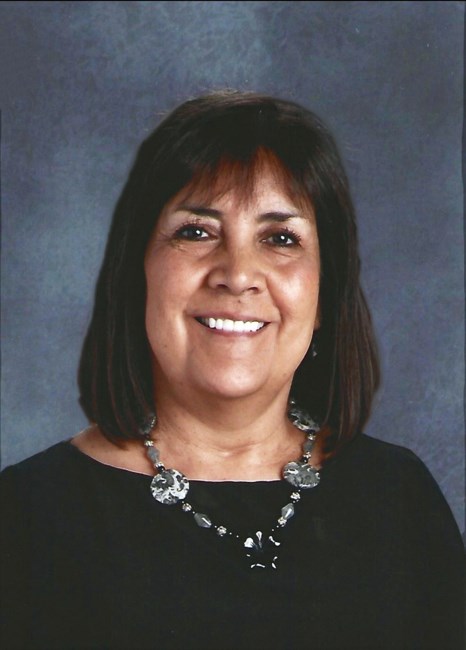 Eduvijes Irene Molinar, 71 years young, went on to be with our Lord on Nov, 20 2022. Irene was born on October 27, 1951 in Odessa, Texas. She is preceded in death by her loving parents, Bernardo B. Ybarra and Eduvijes J. Ybarra. She was a home grown girl who attended Hays Elementary at a time when bilingual education was not available. Her teachers had to go through a bombardment program training to help Spanish only speaking students, like Irene, succeed in school. This experience helped inspire her future plans of becoming a bilingual teacher and helping others like her. She went on to Ector Jr. High and when desegregation was ordered in Odessa she attended Blackshear Jr. High in ninth grade. She always held the Blackshear teachers in high regard because they were the ones that planted the seed in her mind of going to college. She graduated in the Top Ten of her class in 1970 at Ector High School and went on to Odessa College and UTPB to attain her Bachelor's Degree. Years later, she received her Masters Degree from Sul Ross University. She was a bilingual/ESL and reading teacher, bilingual director, principal and assistant superintendent in Ector County ISD. After retiring, she moved to Spring, Texas and went back into the classroom because that is where she felt she could really make a difference and found the classroom the most rewarding. Odessa was her birthplace but she always dreamed of greener pastures. She left Odessa when her first husband, Guillermo Granado, was in the military. They lived in Oceanside, California for a year and a half and came back to Odessa. They had three handsome, loving and wonderful boys: Ivan, Zeke and Ryan Granado. After 34 years the marriage ended, the boys grew up and went their own way. She retired after 32 years in education and married her high school sweetheart, Thomas Molinar, 42 years later. They bought a home in Spring, Texas and lived there for 10 years. She loved big city life in Houston and all the beautiful flowers and pine trees. But her two youngest grandchildren living in San Antonio were pulling at her heart strings. They made the move to be closer to them and family in Odessa in 2019. She said she finally felt like she had finally found her home in San Antonio. Irene is survived by her husband, Thomas Molinar of San Antonio, Ivan Granado and Jennifer of Marion, Ohio; Esequiel (Zeke) Granado and Antonia of San Antonio, Texas; and Ryan Granado and Shawna of Odessa, Texas. She had 9 beautiful grandchildren whom she loved and adored. Irene had three siblings: Israel Ybarra now deceased; Irma Molinar and her husband Albert; and Imelda Castillo. Nieces and nephews include: Elia Goodman, JoAnn Ybarra (deceased), Yvonne Ybarra, Paul Molinar, Jeremy Molinar, Mike Castillo, Alex Castillo, Eric Castillo and Cory Castillo. Irene loved all the people who touched her life and made her a better person. Her mantra was “Leave things better than you found them.” She hopes that she was able to do that for her children, grandchildren, family, friends and through her work with teachers, students and parents in the various positions she held. A rosary will be prayed at 11:00 AM on Friday December 9th at St. John Neumann Catholic Church and the memorial service will be held immediately after at 11:30 AM. Flowers and arrangements can be sent to St. John Neumann Catholic Church at 6680 Crestway Dr. San Antonio, TX 78239. Thank you and God bless.
See more See Less

In Memory Of Eduvijes Irene Molinar