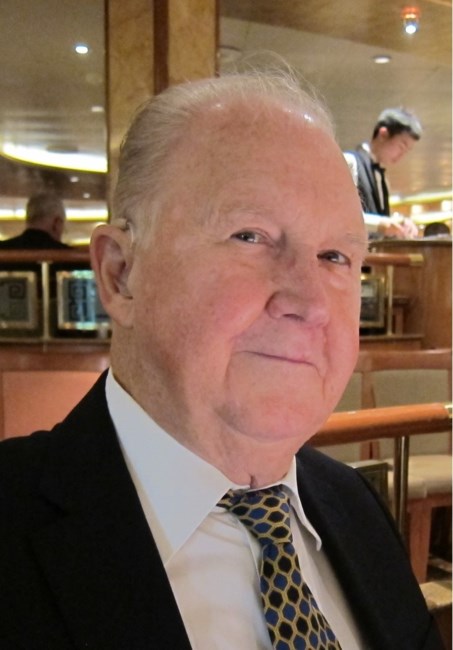 Harry Elsworth Hammond, Jr, age 94; beloved husband of 70 years to Lorraine (nee Wojcik); loving father of Pamela (Steven) Geocaris, Gail (Robert) Cozzi, and the late Harry Craig (Kathleen); dear grandfather of Alexander, Harry, and Marissa Geocaris and Brian (fiancé Katherine Hare), Kevin, and Sara Cozzi; preceded in death by his sisters Edna (Andrew) Gapastione and Carol (Oliver) Feshyn; fond uncle of many nieces and nephews. Harry served our country in the United States Army during WWII where he was stationed in occupied Japan. One of his favorite stories was how on the voyage to Japan, he never got sick and was invited to eat with the officers. He would later sell leftover fruit to his fellow soldiers. He would share many stories about being a bus driver chauffeuring around his fellow servicemen and their families. Harry was a boat man and avid fisherman. Because of his love of boats and fishing, he retired to Florida. Prior to retirement, Harry was a Mechanical Engineer for Northrop for 27 years. He was admired for his loyalty as a friend. He made friends easily and kept them for a lifetime. He had a large following of friends that ranged many ages. Memorial services will take place on Saturday, October 1, 2022 at Modell Funeral Home, 7710 S. Cass Ave, Darien, IL. Public visitation will be from 9 a.m. to 10 a.m. followed by prayers at 10 a.m. Immediately following prayers, we will proceed to Our Lady of Peace Church in Darien, IL for Mass at 10:30 a.m. Burial services will immediately follow at Resurrection Catholic Cemetery in Justice, IL. In lieu of flowers, the family respectfully requests donations be made to the National Kidney Foundation.
See more See Less