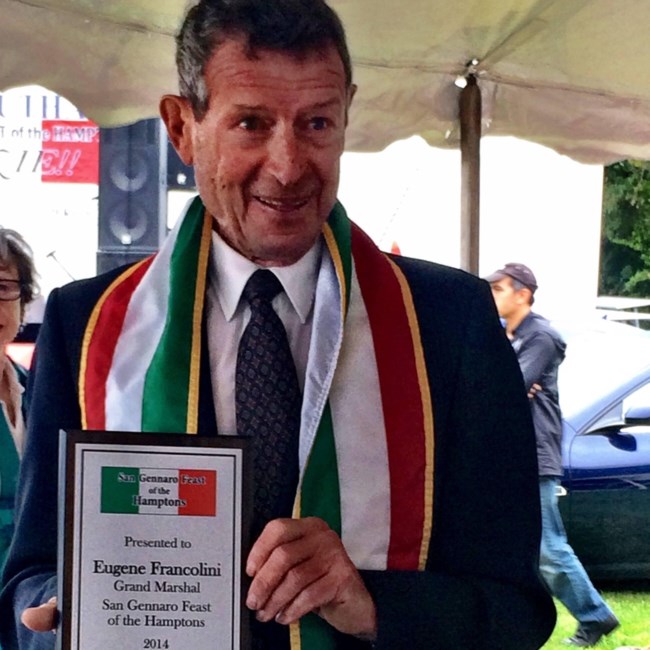 Eugene Robert Francolini, of Hampton Bays, NY and Palm City, FL died peacefully in his Florida residence with his wife, four children, and god daughter by his side on December 12, 2020. He was 90. Eugene was born to Sally and Charles Francolini on August 17, 1930 in Brooklyn, NY. After graduating from Chaminade High School in 1948, he joined the Navy and served until 1952, including two years in Japan during the Korean War. Upon his return to the US, he attended Georgetown University and graduated from St. John’s University where he earned both his undergraduate and law degrees. He became the Assistant District Attorney for Suffolk County and in 1962, opened his own general practice law firm where he worked until his retirement in 2010. In 1989, he and his wife Theresa bought a winter residence at Harbour Ridge Yacht and Country Club to ensure that Eugene could enjoy several of his favorite activities all year long. An avid outdoorsman, he delighted in playing golf, clamming, fishing, sailing, and gardening. In rainy weather, he would take his passion indoors and bake. His delicious breads, cookies, and even the super challenging sfogliatelle were not his wife’s first choice of how to spend his time in her kitchen, but she enjoyed all of his tasty treats nonetheless. Another favorite activity was to plan yearly vacations for all 20 of his family to be able to enjoy a week together during the Christmas season. Eugene selflessly gave back to his community, and in 2014, received the honor of being named the grand marshal of the San Gennaro Feast of the Hamptons for his extraordinary dedication of service for over 50 years. His many leadership roles included President of the Hampton Bays Board of Education, President of the Hampton Bays Lions Club, founding member and director of the Southampton Golf Club, and member of the Southampton Elks Club. He was also named an honorary member of the Hampton Bays Fire Department for his pro bono work to create Good Ground Road, a means by which the firemen could more easily and quickly address emergencies. Predeceased by his two older brothers Richard and Charles and his son-in-law, Arthur J. Jones III, he is survived by his wife of 60 years, Theresa Capone Francolini; four children, Gail and her husband Jeff Warren, James and his wife Deidre, Carol, and Mary Francolini; and eleven grandchildren, Julia, Charlotte, Cary, Joseph, Michael, Kyle, Garrett, Alyson, Colby, Madelyn, and Kate. Arrangements will be made for late spring or early summer in Hampton Bays. In lieu of flowers, the family humbly requests gifts made to the AJJ Scholarship Fund to support the Hampton Bays High School Golf Team in memory of Eugene Francolini. www.ajjscholarshipfund.org.
See more See Less

In Memory Of Eugene R Francolini