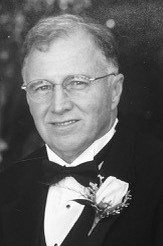 Dr. Cameron Curtiss Buckland passed away after a long battle with Parkinson’s Disease on January 10, 2022. He would have celebrated his 80th birthday in a few weeks. He was a lifelong Clevelander who spent many summers visiting his mother’s family in Boston where he developed an affection for the Boston Red Sox. He enjoyed sharing childhood memories about riding the MBTA to Fenway Park to see games. One year for Christmas, his son gave him a Red Sox jacket that he wore with pride. The jacket led to many interesting conversations in Cleveland as he also cheered for the Cleveland Indians. In addition to cheering for the Sox and Indians, he rooted for the Cleveland Browns, Cleveland Cavaliers and The Ohio State Buckeyes. He was known to become a little crabby if his beloved Buckeyes disappointed him. He also enjoyed attending as many high school football and basketball games as possible. Cameron graduated from Lorain High School where he excelled in basketball, baseball, and track. His secondary educational endeavors resulted in multiple degrees from Denison University, Oberlin College, Case Western Reserve University, and Kent State University. He was awarded a PhD by Kent State in 1990 for Curriculum Studies. His dissertation titled “The Probable Effect of Tuition Tax Credits and Voucher Plans on Selected Public School Systems in Northeast Ohio,” was ahead of its time as school funding is still a topic of debate in the Ohio Legislature 30 years later. Cameron taught in the Shaker Heights school system for 35 years. He finished his tenure at the high school where he taught Advanced Placement (AP) Government and U.S. History. He was honored to have been selected to serve as an AP test grader on multiple occasions. In retirement, he earned the distinction of “Master Gardener” and volunteered with the Master Gardeners program of Cuyahoga County. Cameron is survived by his wife of 54 years Jeanie, children Heather Nowakowski and Erik (Jennifer), and four grandchildren Morgan, Andrew, Ava, and Zack. The family will be hosting a celebration of Cameron’s life at a future date. In lieu of flowers, please consider a donation in Cameron’s memory to InMotion (beinmotion.org). Fond memories and expressions of sympathy may be shared at www.neptunesociety.com/location/cleveland-cremation for the Buckland family.
See more See Less