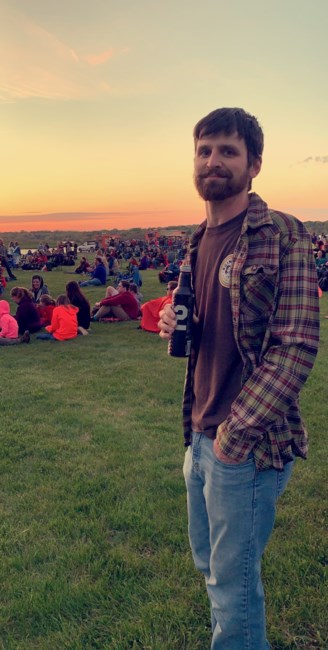 Nate was a loving husband, father, son, and friend with a strong passion for music and art. He was born in Omaha, Nebraska where he grew up and built his family. On January 16th, 2023, he passed away at the age of 33. Even as a kid, Nate had a love for art, whether it was art in the form of doodles, his favorite bands, retro video games, or sneakily clever cartoons. As he grew up, he embraced this passion and created his own art. As a teen and young man, Nate learned how to mix his own music. You could find him messing around on Audacity to make his own silly mashups of songs for him and his friends to enjoy. Drawing was also a great outlet for him, evolving from designing unique creatures to beautiful interpretations of his wife and children, where you could see the love radiating from a single glance at his artwork. Anyone who spent any amount of time with Nate would leave with a greater appreciation of art in all forms, whether it was nature’s beauty, movies, drawings, or music. Music was especially important to Nate, and he loved all kinds. He had a deep appreciation for the conventional classics, like the Beatles, but dug into the depths to find gems that were often overlooked, like Ween and Frank Zappa. Nate always had a soft spot in his heart for underappreciated talent. Some would say some of his tastes were a little weird (cough, The Residents, cough), and he would agree! But he loved them just the same. His record collection was a thing of beauty, comprising the most popular works of all time alongside bands you’d never heard of. As a friend, Nate was unlike any other. He was always there for anything you needed and expected nothing in return. If you were too afraid to clean your gutters, he’d be over in short time with a ladder. If you were moving, he’d be with you to pick up the moving truck. If you were feeling down, he’d be there with a beer and a smoke to just hang out with you. He had a witty sense of humor and an insightful way of looking at the world that would always leave you feeling better than before you saw him. In 2009 he met the love of his life, Rebecca. There was an immediate connection between the two. They shared and complemented each other’s quirks and passions. After nine years, Nate finally gained the courage to ask for Rebecca’s hand in marriage, and the two tied the knot on August 25th, 2018. From there they built a family together, having two baby girls, Valarie and Violet. Nate was a devoted father, always the one to snuggle Valarie and put her to bed, always at her side. He even found beauty where no one else could, in the music of Super Simple Songs, Valarie’s favorite music to listen to. Nate was preceded in death by his grandparents, Barbara and Tom Burke, and his father-in-law, Mark Stormberg. He is survived by his mother, Holly Wichert, his wife, Rebecca, and his two daughters, Valarie and Violet. His enthusiasm for nature and the arts, clever sense of humor, and deep compassion for those around him touched so many of us. He was dearly loved and respected by his many friends and family, and he will be sorely missed. A Celebration of Life will take place on February 4th from 5:00 PM-9:00 PM at The Broadmoor63 in Omaha, Nebraska (2323 S. 63rd Circle). The Celebration of Life will be a time for family and friends to come together to share stories, memories, and celebrate Nate. The family requests memorial tributes be sent to Thomas Stormberg to assist with expenses.
See more See Less

In Memory Of Nathan Joseph Wichert

Send flowers in the next 7 hours for guaranteed delivery.