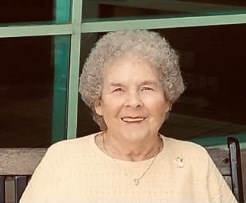 Jean L. (Hughes) Kitchen of Worth, Illinois, passed away peacefully in her sleep in Bossier City, Louisiana, on September 21, 2022 at the age of 93. She was the third of seven children born to Clyde & Ruth Hughes and grew up on the hill in Knapp Creek, New York. She so loved riding her bike around what is now Rock City Park, New York, and wanted that to be her final resting place. She married James Holdcroft after WWII and raised their 4 children (Robert (2008)), Debi, Don and Ruth) in Worth, Illinois. After a most amicable divorce, she married George McGrath, Sr. After he passed away, she was then married to Charles Kitchen until his death. Her beloved Jack Prochaska then filled her heart until his passing. She was co-owner and bookkeeper of the Worth Cabinet Shop, a founding member of the Worth Pool, a volunteer usher at Moraine Valley Community College, and worked tirelessly in the food pantry at Worth Methodist Church. She is predeceased by her parents, brothers Clyde Hughes and Ralph Hughes; sisters Evelyn Toothman, Lois Foster and Nina Graham Croft. James Holdcroft, George McGrath, Sr., Charles Kitchen, Jack Prochaska, stepson George McGrath, Jr., and most of her friends also preceded her in death. She lost eldest son, Bob, far too soon. As if that wasn’t hard enough, she tragically lost her great-grandchild, Daniel Holdcroft, Jr., which absolutely broke her heart. She is survived by her sister, Mary Ellen Barton of Olean, NY,; her children, Debi Holdcroft Brewer of Bossier City, Louisiana, Donald Holdcroft of Alsip, Illinois, and RuthE Holdcroft (Lee) Washack of Bourbonnais, Illinois; her stepchildren Lou (McGrath) Binder, and Scott McGrath; her grandchildren James Holdcroft, Felicia Holdcroft, Sara Lape (Travis), Amy Richardson, Daniel Holdcroft, Sr., Steven Washack (Monica), Stacy Washack, Kevin Zikis, and Kate Tenpenny (Jon); and several great-grandchildren. No services will be held at this time. She will soon fly with the angels from “Ashes Point” in Rock City Park. Feel free to make a donation on her behalf to your local church or food pantry, or simply wear an angel pin as she always did. Fond memories and expressions of sympathy may be shared at www.neptunesociety.com/location/new-orleans-cremation for the Kitchen family.
See more See Less

In Memory Of Jean Louise Kitchen