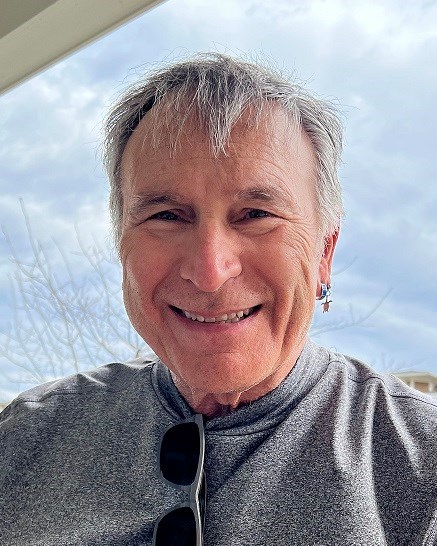 Paul was always a stoic man, appearing aloof and standoffish. But once you got to know him that child-like goofiness would come out and he would morph into a funny, crazy, vibrant, and bigger-than-life personality. This picture encapsulates that beautiful face with his zest for life. We will miss this wonderful man whose smile and laughter would make our heart melt. Paul was born in Valparaiso, Indiana on November 17, 1949, the oldest of five children. Predeceased by his parents George and Marilyn, two sisters, Janette Algozzini and Susie Timmons. Survived by a sister Georgette Elder and brother Frank Algozzini. As a young boy his family realized his gift for singing and provide voice lessons, which began a life-long love for entertainment, theatre, and music. Paul became a Chicago sports fan at a young age beginning with the Cubs, Bears, and Blackhawks. He spent winter months skating on lakes, ponds, and playing hockey. He continued playing hockey throughout his adult life until late fifties. Paul is survived by his soul-mate Linda and his children: Paula Algozzini Johnson, Misti Michelle Turner, Wende Rachell Watson, George Eugene Algozzini, and John Francis Algozzini. Predeceased by the youngest son, Dustin Lee Laun. Paul is survived by 14 grandchildren (8 boys & 6 girls): Paul Joseph Algozzini II, Dalton Lee Johnson, Alexxas Rene Mitchell, Clarisa Rachell Hall, Anton Jacquez (AJ) Hall, Mia Leigh Watson, Quinn Joseph Watson, Lydia June Algozzini, Audrey Ann Algozzini, Domanic Joseph Algozzini, Dillon Mitchel Algozzini, Anthony Westin Algozzini, Leland John Algozzini, Elayna Nicole Algozzini and one great granddaughter, Violet Rene Johnson. Paul spent 40+ years as an educator: Math and Counseling, which included Missouri, New Mexico and California. However, his life-long love of sports transferred into a love of coaching football. In 2018 Paul moved back to Kansas City after living in California for almost twenty years. The highlight of his return to Kansas City was living at Liberty at Shoal Creek community where his many talents allowed him to chair the communication group, teach his peers to play Bocce, teaching line dancing, holding mixers, and participating in Karaoke and Music Trivia nights. During the last four years of his life, he was the one male that stood alongside five “Golden Girls” that he cherished, cared for, and protected while traveling or just plain having fun with games, cards, movies, karaoke, and not to forget shopping. His tribe is grieving the loss of a true friend and will work as a team to move through our shared loss. Paul is survived by a community of friends and family who will miss his presence in their lives. A funeral mass will be held Wednesday July 13, 2022, at 10:30 AM, Visitation will be at 9:30 AM followed by a Rosary just prior to mass at Holy Family Catholic Church, 919 NE 96th St. Kansas City, MO 64155. The family asks that contributions be made, in lieu of flowers, in Paul’s name for: Covid 19 Research and Clinical Funds (Mayo Clinic), American Brain Foundation, and The International Bipolar Foundation. Please take a moment to sign our electronic guest book AND share a memory/photo. The Funeral Mass will be available online for those unable to attend at: www.holyfamily.com Once on the site, find the button for watching Mass and it will link you to a YouTube page.
See more See Less