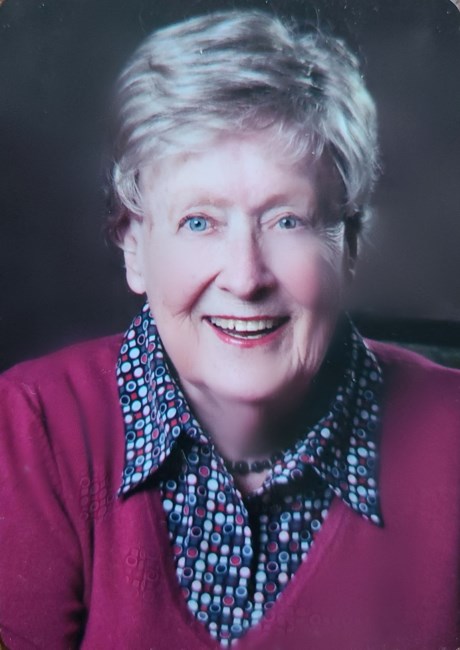 Carla Dorothy (Schuster) Dineen was born December 23, 1931, in Wauwatosa, Wisconsin, to Charles and Dorothy Schuster. She entered Heaven on October 8, 2021, surrounded by her children and grandchildren. She was active in Alpha Gamma Delta sorority and earned a degree in education from Carroll College in Milwaukee, Wisconsin. She began her career as a middle school teacher in the heart of Milwaukee. It wasn’t long before she met another young teacher named Joan Dineen, and the two instantly became best friends. It was at one of Joanie’s epic parties that Carla was introduced to Joanie’s brother - “a famous cattle rancher” named Bud (aka, Ed Dineen) who had just returned from Army basic training. Although Carla arrived at the party with her boyfriend, Milwaukee’s Lightweight Boxing Champion, she was swept off her feet by the charming “rancher”. Bud invited Carla to his “ranch” (aka, the family’s dairy farm) so they could get to know each other better. There would be a big party at the Dineen Farm that day. Carla, the sophisticated city girl who was always up for a party, was happy to go along. Poor thing had no idea she was going to a Chicken Butchering Party! Regardless of her extreme fear of birds and the lifetime of nightmares that followed a great time was had by all. Carla got to meet many of the Dineen siblings and cousins on that overwhelming day, and the deal was essentially sealed! Bud and Carla married on December 28, 1957, and moved to Kansas City, Kansas. This started a series of cross-country moves as Bud climbed the cattle buying corporate ladder. Carla continued to teach, reaching children in nearly every grade from preschool through high school, all while raising three daughters. Throughout their many moves - from Kansas City to Chicago, back to Kansas City; to Marshall, Minnesota; Stockton, California; Gering, Nebraska; Rochelle, Illinois; Altoona, Iowa; Huron, South Dakota; Liberal, Kansas; then back to Altoona after Bud’s death and finally to the Santa Marta Retirement Community in Olathe, Kansas - Carla immediately made life-long friends with nearly everyone she met. “Classy” “Sassy” “Life of the Party” “Loving” “Considerate” and “Kind” were words often used to describe Carla and are all ways she will be fondly remembered. We rest peacefully, knowing that Carla was greeted by throngs of friends and loved ones at Heaven’s Gate, with ginormous hugs, Bud’s steaks on the grill, raucous singing and laughter lead by Joanie Siegler, Jim Thorn’s martinis, Dick Dineen and the raw beef, Margaret Dineen’s sheet cake, and of course Erv Lauer’s campfire popcorn for dessert. Carla is survived by her brother, Jay Schuster (Marylyn) of Pewaukee, Wisconsin, daughters Claudia Dineen (Mike Vandewart) of Texas, Monica Gulling (Jim) of Iowa, and Connie Jabara (Charles) of Kansas. She is also survived by grandchildren Devin Gulling (Lacey), Rachel Gulling (Austin O’Brien), Sam Jabara, and Sarah Jabara, as well as numerous nieces and nephews. Carla was preceded in death by her parents, her husband of 49 years, Edward “Bud” Dineen, and infant son Edward Michael Dineen. A Mass of Christian Burial and Celebration of Life will be held at a later date in Cedarburg, Wisconsin, with internment to follow next to Bud. In lieu of flowers, please consider donating in Carla’s memory to one of her favorite charities: St. Judes Childrens’ Hospital, Boystown Ranch, or Guide Dogs for the Blind.
See more See Less

In Memory Of Carla Dorothy Dineen