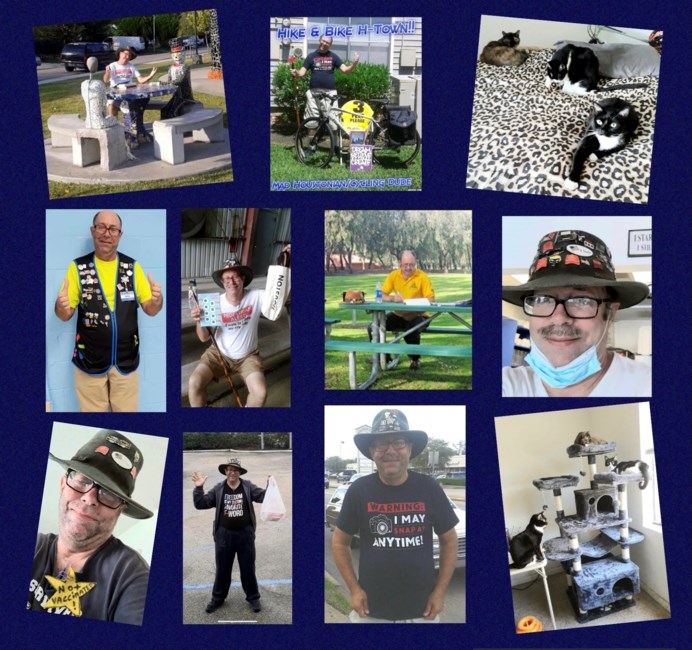 Kiril Giorgio Kundurazieff, 61, of Houston, Texas, passed on March 01, 2022. Kiril was born on March 05, 1960. Kiril’s parents were Mary Alice Wells and Giorgio Kundurazieff, he was the first child of three children. He attended San Antonio Elementary, Palomares Jr. High, and Pomona High School. He went on to attend Cal State Los Angeles where he earned a bachelor’s degree in political science. After graduation he began working as a sales clerk/Manager at NewsBoy Books and Video. He continued his career working for Verizon, Target, and eventually settling in at Walmart in Houston Texas. Kiril Was a Christian man and believed in God, He prayed every day and learned so much from his mother about religion. He was baptized and gave his life to God, continuing to follow Gods word in his life. Kiril loved walking, hiking, and riding his bike. He walked many miles and rode many bike trails enjoying his life and passion for the outdoors. He was a member of the “Everwalk Nation”, and “Houston Happy Hikers”. He also attended local bike rides and supported the biker community. Kiril was a creative writer, story teller, poet, avid blogger, known as the Mad Macedonian with a sense of Humor. Kiril loved reading and writing and had a passion for cats. He had several cats first being Nikita , and currently Elvira, Sneakers and Friday. Elvira became the inspiration for his cat blogging site (Opinionatedpussycat.com) This became the beginning of his story’s about his cat Elvira and he became the voice of her adventures. Kiril went on to create many more sites that expressed his passions in life. He was the Author of (Cyclingdude.com, sneakeasysjoint.com, madmacedonian.com, youtube.com/user.TheMadMacedonian). Kiril enjoyed poetry and attended open call forums where he read his poetry to audiences. He became a supporter of the Cat community attending and supporting Cat Paw conventions. His passion for all of this was widely known by his friends and family and it showed in his everyday life. Kiril was a true American and believed in his right to Freedom for all. He expressed this by writing and attending local rally’s supporting his beliefs and standing up for what he believed in. He made it a habit to make shirts and signs that he would wear which expressed his thoughts and belief’s. some were extremely funny as his sense of humor played a part in making them. His most prize possession was his Stetson Hat he wore with pride that displayed many pins that supported his belief’s. Kiril had many friends from all over the blogging community, the cat community, biker community, writers, community, his work at Walmart, you name it , whatever he was involved in he made friends. He was a kind and gentle soul with dreams and aspirations of writing and publishing his books and blogs someday. The support and love from his friends showed in all he did. He loved everyone of his friends and the support they gave him every day. Although he may be up in heaven today he is still writing his heavenly blogs I’m sure. As a tribute to who Kiril was, his longtime friend (Kender MacGowan wrote a very meaningful piece as a tribute to him and his passing. This beautiful piece says a lot about who Kiril was. Thank you Kender MacGowan… He was a simple man, who lived a simple life. He was satisfied with what he had and spent his time in the simple pursuits of walking and biking excursions, posting about his adventures on his blogs, letting his cats have their own blog, and sharing posts and articles he loved or thought others should see. He loved his job as a cashier at Wal-Mart. He never got wealthy financially, but he was very rich in ways that matter. He marched to his own drum, never caring what others thought, and loved to engage others in conversation. To that end he wore a Stetson covered in collectors pins related to issues he cared deeply about and wore t-shirts with statements on them that would invariably start those talks he loved to have. He would attend council meetings and meetings of the government bodies that dealt with making a community more friendly for pedestrians and bicyclists. He didn't drive, or even own a car. He had a love of poetry. He was very proud of his heritage, and loved his family fiercely, and spoke highly and fondly of them. He was loathe to ask for help, but quick to offer it. Our phone calls could last hours. No matter how much time passed between them it was always as if we had spoken yesterday. Now the Yesterdays are all I have. My dear friend, compatriot, indeed, brother from another, Kiril Kundurazieff , the Mad Macedonian, has passed, and my world is so much dimmer. We grew up in the same place, at the same time, but never crossed paths until we met online. You wouldn't think someone you never met in person could have such an impact that when you hear they are gone you freeze up and sob, but it's happened to me, tonight. Farewell, my dear friend. My world is smaller without you in it. I'll see you on the other side. Written By; Kender MacGowen Kiril, We love you very much and will miss you and your quirky, funny sense of humor, poetry, writing, biking, walking, cat blogging dude, opinionated pussycat, Houstonian guy that you were. The world will not be the same without you. You left your mark leaving your legacy as the Mad Macedonian. Rest in Peace Kiril, See you on the other side of the Stars. Kiril is survived by: Sisters- Violeta Gonzalez age 57, Risana Nowell age 54 Brother in law -Brian Nowell age 53 Nieces : Michelle Jones age 30, Haylie Nowell age15 Nephew : Hunter Nowell age16 Cats- Elvira, Sneakers, Friday
See more See Less

In Memory Of Kiril Giorgio Kundurazieff