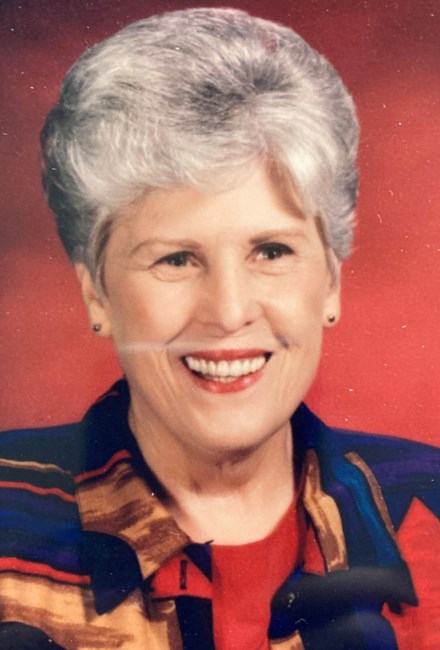 Joe Ann Shelton went home to be with her Lord and Savior on Thursday, June 2, 2022 just nine days shy of her 90th birthday. She was born in Durant Oklahoma on June 11, 1932 and passed into His presence from her home in Holland, Michigan. God gifted her with a beautiful voice which she developed at Oklahoma Baptist University, North Texas State University, and the University of Texas at Austin and which she used for the glory of God. She taught voice at Southwestern Baptist Theological Seminary for nine years, before becoming the Director of Program Music at the Southern Baptist Radio and Television Commission. In 1970 she joined three partners engaged in land development and the marina business. The business enabled her and her accompanist, Loeen Bushman, to continue traveling across the U.S. and to more than 30 countries to sing concerts, many of them for the International Mission Board of the Southern Baptist Convention, with whom she also served as a short-term missionary in Korea and India. She made numerous albums as a gospel singer over a thirty-year span and sang at Billy Graham crusades in London, England, and in Houston, Texas. Following treatment for addiction to alcohol and pain medication in 1988 in Richmond, Virginia, Joe Ann was a student in the Alcohol and Drug Education and Rehabilitation Counseling Graduate Program at Virginia Commonwealth University. Along with her friend and ministry partner, Joyce De Ridder, she spent the last 34 years of her life devoted to helping addicted individuals and families get into recovery. Joe Ann moved to Holland, MI, in 1992. She joined Calvary Baptist Church, developed the music program at Calvary Baptist Schools (now Calvary Schools of Holland), and took her first high school choir on a mission trip to Slovakia in 1994. Three years later, with an invitation from a Slovak Baptist church, she and Joyce moved to Slovakia where they worked with addicts and families, developed training materials, introduced AA to a major treatment center, helped establish AA and Al-anon groups in various cities, and were partners in founding a nonprofit organization, Life without Addiction. In the first half of their twelve years in Slovakia, Joe Ann also taught church music in the Department of Evangelical Theology and Missions at Matej Bel University in Banska Bystrica, trained and directed a traveling ensemble of 12 singers that represented the department throughout Slovakia and on two trips to the U.S. She also formed and directed church choirs. With the assistance of Slovak churches, she and Joyce established English language summer camps for children and hosted several volunteer groups from Michigan and Texas to teach in the camps. Joe Ann and Joyce returned to the U.S. in 2009 and ministered in Amarillo, Texas, before returning to Holland, Michigan in 2012. Joe Ann served on the Global Outreach Committee of Calvary Baptist Church and counseled individuals until her death. She is survived by Joyce De Ridder, her companion and ministry partner; nieces, Pam Whetzel of Pennsylvania, and Paulette Parker of Maine; nephews, Greg (Paula) Posey of Virginia, and Jeff Shelton of Tennessee; and several great-nieces and a great-nephew. She was an adopted family member of a number of families. A celebration of life service will be held at Calvary Baptist Church, 517 32nd St, Holland, MI 49423 on Saturday morning, June 18th, at 11:00 AM. The service will be live-streamed. Memorial contributions may be made to the scholarship fund of Calvary Schools of Holland or to Associates in Accomplishment, Inc. Fond memories and expressions of sympathy may be shared at www.neptunesociety.com/location/grand-rapids-cremation for the Shelton family.
See more See Less