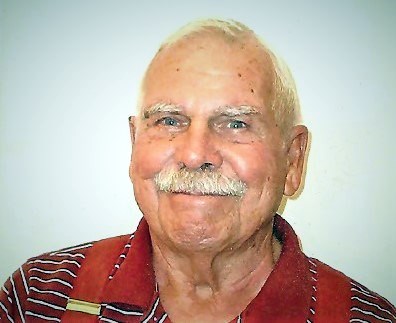 Albert (Al) Raymond Dalton of Bonita Springs passed away on October 15 as a result of complications from a stroke. He was predeceased by Marcia Lee Dalton, his wife of 69 years who died on July 25, 2022. Al was born on March 8, 1926, in Pawtucket, RI, to Alfred and Edna Dalton. He was predeceased by his sisters Betty and Margie. A consummate musician, he played baritone horn, tuba, and violin as a youngster, before mastering string bass, piano, and banjo as an adult. After graduating from high school Al enlisted in the United States Army Air Forces where he served between 1944-1946. He never saw action but was extremely proud of being a veteran. He loved to wear his WW11 'Flyboy” cap and had been scheduled for the next Collier-Lee County Honor Flight to Washington, D.C. Using funds from the GI Bill, Al attended the New England Conservatory of Music where he developed his love of jazz and swing. He was the first one in his family to attend college. During a family visitation day at a summer camp where he was working, he met the 'gorgeous blond' that was to become his wife. After Al completed his teacher's certificate from the Rhode Island College of Education in 1953, they were married. Al's first job was at Barrington Public Schools in R.I., but he also taught in Scarsdale, NY before settling in Oceanside, NY where he spent most of his teaching career. During this time, he started a family band, the Dalton Family Singers, with his wife and four children. The group performed folk music at festivals, libraries, nursing homes, and other community venues. The group was featured on Maine Public Television and in a New York Times feature story. Al retired in 1981 after working in public schools for nearly 30 years. Al and Marcia loved to travel, both overseas and in their Airstream trailer. Their sense of adventure brought them to some 40 different countries including Egypt, Morocco, China, and Peru. They settled in Bonita Springs in the mid-1980s, while at the same time spending summers on beautiful Oak Pond in Skowhegan, ME. In 1991 Al founded the Bonita Village Band, a popular Mummers-style band that featured instrumentalists, singers, and 'strutters.' For over 25 years the group performed weekly for area retirement communities. He also was a Master Swimmer who competed in Florida and Maine and twice at the National Senior Games. Al had a larger-than-life personality and many things that he enjoyed doing including crossword puzzles, going on cruises, watching Jeopardy! going to the beach, and sipping Jack Daniels. He loved spending time with his family in Maine, New Jersey, Pennsylvania, and on Marathon Key in Florida. Al is survived by his four children Jonathan, Jessica (Hayden), Jeremy, and Jeffrey, their spouses Jane, John, Nancy, and Patricia, nine grandchildren, Christopher, Kyle, Kathryn, Dakota, Julia, Jacob, Haley, Robby, and Jeffrey, and three great-grandchildren Roxanna, Jameson, and Samuel. A private memorial service for the family will be planned for a later date. The family requests that any memorial donations be sent to the Collier-Lee Honor Flight in Naples, FL, or Tidewell Hospice in Port Charlotte, FL. Neptune Society in Fort Myers is entrusted with final care.
See more See Less

In Memory Of Albert Raymond Dalton