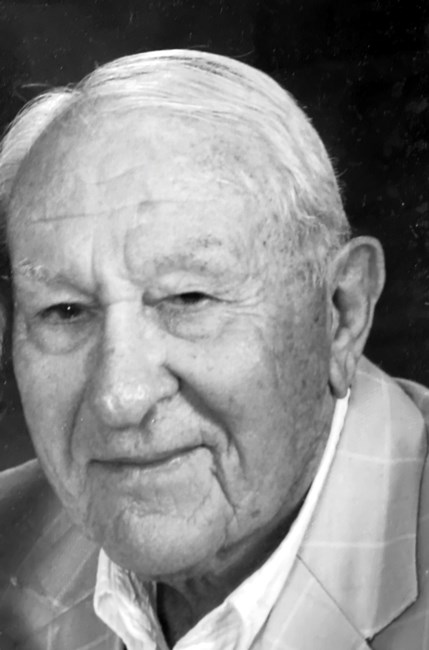 Fritz Forrest Jacobs, 98, of Fort Myers, Florida, passed away on Thursday, August 19, 2021. He was born November 12, 1922 in Fairmont, WV to Fred and Juanita (Thomas) Jacobs. He was preceded in death by his parents, his first wife Helen P. Jacobs and son, Fritz Jacobs, Jr. He is survived by wife, Gladys H. Jacobs; daughter, Lyn Ferreira (Ted) of Fort Myers; grandsons, Lee Jacobs (Kim) of Nicholasville, KY, and Austin Jacobs of Winchester, KY; daughter-in-law, Audeen Jacobs of Winchester, KY as well as niece, Cynthia Havlichek of Fort Myers. Fritz was a current member of Cypress Lake United Methodist Church, 25 year Rotarian, and former member of Cypress Lake Country Club, Myerlee Country Club and Whiskey Creek Country Club. He played HS football, basketball and baseball and graduated from Fairmont Sr. HS and Millersburg Military Institute (KY) in 1941, served in the United States Air Corps 1943-46, received BA degree from Fairmont State University where he played basketball, MS degree from West Virginia University and completed graduate work in education administration at Ohio State University. He began his career in education in Ohio in 1947 as a teacher and coach, served as Executive Head of Schools in Utica, OH, and Superintendent of Ashtabula, OH City Schools 1958-62. He became Superintendent of Circleville, Ohio City Schools in 1962 where he retired in 1981. Fritz and Helen moved to Fort Myers in 1982. After Helen’s death in 1989, he and Gladys were married in 1991, and spent numerous summers in the mountains of NC. In addition to playing golf and high school and college sports, Fritz was a lifelong sports enthusiast, following his favorite teams West Virginia University, Ohio State University and Atlanta Braves. No services are planned at this time.
See more See Less

In Memory Of Fritz Forrest Jacobs