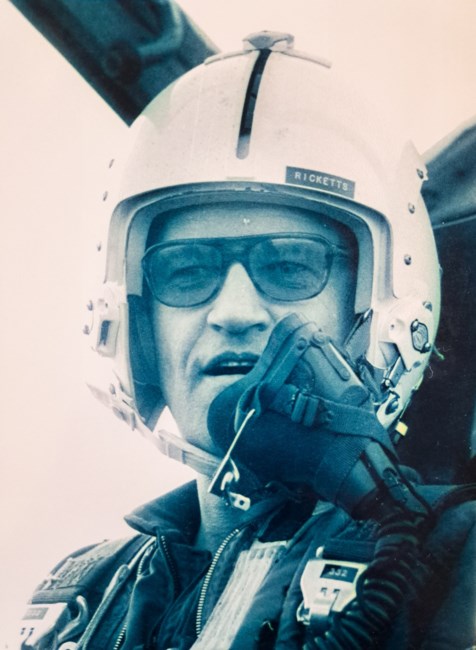 Charles (Chuck) Earl Ricketts, 88 of Harker Heights, Texas, passed away on September 15, 2022. He was born on December 9, 1933, in Scircleville, Johnson Township, Indiana to Joseph Ricketts and Marie Ricketts née Floyd. Inspired by his father’s trailblazing experience as a flying farmer and his aunt Helen (Hooks)’s service as a WASP during WWII, Chuck’s lifelong love of aviation led to his first solo flight on his 16th birthday. The achievement was celebrated in the local Indiana newspaper with the headline “Youngest Flying Farmer At 16 Years of Age.” While attending Purdue University, Chuck joined the Air Force in 1952. As an accomplished pilot, he was assigned to the B-36 Peacemaker of the Strategic Air Command based in Loring Air Force Base, Maine and Ramey AFB, Puerto Rico. During his time in Puerto Rico, he purchased his own plane and piloted private flights for officers and VIPS who visited the island. After being honorably discharged from the Air Force in 1956 at the rank of Tech Sergeant, he joined the Civil Aeronautics Administration at Albuquerque ARTC in Albuquerque, New Mexico as an Airways Operations Specialist, the predecessor to today’s FAA air traffic controller. Chuck transferred to Phoenix Center in 1960. In 1963, Chuck transferred to the newly opened Albuquerque ARTCC consolidated radar facility. Chuck rose rapidly in his FAA career, working as a Team Supervisor, Assistant Chief, Control Room Supervisor, Area Officer, and Area Manager, retiring in 1989 as Assistant Manager for Training. Chuck was an enthusiastic trap shooter, founding the Del Norte Gun Club with a few Albuquerque ARTCC coworkers. He was an accomplished marksman and was the American Trap Association champion for New Mexico with a 99 of 100 performance in 1969. He and his second wife, Barbara Ricketts, who he married in 1979, were avid square dancers and belonged to the Spares & Pairs, Square Ups, and Allemanders clubs in Albuquerque, New Mexico, and the Guys & Dolls Club in Texarkana, Arkansas. Upon retirement from the FAA, Chuck obtained a Commercial Driver’s License and enjoyed travelling the nation’s highways delivering heavy trucks for the Ledwell & Sons company from his home in Texarkana, Texas. Shortly before his passing, Chuck attended a Windsor chair making course in Tennessee with his son, Greg, and grandson, Kris, handcrafting a rocking chair for future generations to enjoy. A devoted fan of the Indianapolis 500, he watched the event on television in the years when he was not able to attend in person. Chuck is survived by his wife Barbara Ricketts, sisters Norma Kiper (Jerry) and Mary Martin (George), daughter Diana Williams (Clay), son Greg Ricketts (Allison), stepson Harvey Portwood (Keri), and stepdaughter Tina Vazquez, 14 grandchildren and 5 great grandchildren. A private service and interment will be held at the Central Texas State Veterans Cemetery, Killeen, Texas.
See more See Less

In Memory Of Charles Earl RICKETTS