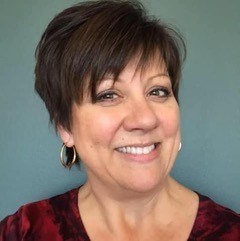 Jacqueline “Jackie” L. Kelso (Anderson), age 56, of Albuquerque, New Mexico, formerly from Berthoud and Westminster, Colorado passed away on June 22, 2022. “Some of it’s magic, some of it’s tragic, but I had a good life all the way” -Jimmy Buffet Jackie was born February 4, 1966 to parents Jack L. Anderson and Patsy “Trish” R. (Boulware) Anderson in Inglewood, California. She was raised in the sunshine of Southern California. Her family moved several times during her childhood around the southern California area and eventually made a final move to Berthoud, Colorado in 1979. She graduated from Berthoud High School in 1984. She attended Northeastern Junior College (NJC) in Sterling, Colorado and graduated with an Associates degree in 1986. Jackie worked for Neodata in client services for 20 years and then for Edward Jones, a financial services company, for the past 11 years, most recently in Albuquerque, New Mexico where she had made her home after moving from Westminster. In addition to her fulltime job, Jackie sold Mary Kay Cosmetics for many years and enjoyed the many connections she made through the years with clients and Mary Kay consultants and staff. She was married to Ed Kelso for 30 years and together they raised an amazing son, Ryan Kelso, who was born August 23, 1998. Jackie was very involved in Ryan’s activities including being an adult sponsor for camping trips with the Boy Scouts and being a parent helper and booster at the many Legacy High School Marching Band performances, trips, and competitions. Jackie enjoyed spending time in the mountains, visiting with friends and family, and traveling. Later in life she and her faithful traveling companion, Brenda Croteau, had many adventures together including a recent sailing trip in Florida. She and Ryan were planning a long trip to Italy this fall. Music was a large part of Jackie’s life and she was a talented singer who loved to share her gift with others. She performed in a variety of musical settings on many different stages for over four decades. She was involved in music, cheerleading, and flag corps during middle school and high school and went on to perform with the “College Singers” while attending NJC. Continuing her lifelong passion for music she sang at weddings, dances, parties, and family gatherings developing her own group of devoted fans. Most recently she was a member of the “Enchanted Mesa Show Chorus” which gave her great joy and comfort right up to the time of her passing. When she performed she was always the star of the show with her bright personality, warm sense of humor, beautiful outfits, and her wonderful voice. Among the many songs she performed, she was most noted for her renditions of Patsy Cline classics. She fought a long and courageous battle with breast cancer. After her initial diagnosis she became an active participant in many breast cancer awareness and fundraising events including marches, walks, and runs. In her journey through treatment, hair loss, surgery, sickness, and the eventual outcome her smile and strong spirit were an encouragement and blessing to others. She was grateful for the outpouring of support from the many family members, friends, coworkers, and acquaintances whom she lovingly named “Jackie’s Army” who joined her in her fight against cancer. Jackie moved into the home of Chuck (Brother) and Lynette (Sister-in-law) Anderson in Berthoud, CO to receive Hospice Care shortly before her death. While only for a few days, it was a great comfort for her in the end to be in a place where she truly felt at “home.” She succumbed to Stage 4 Metastatic Breast Cancer surrounded by family and friends. Jackie had a warm smile that she shared with everyone and her laughter would fill the room. She gave selflessly to the people around her and made a real difference in the lives of many whom she supported with love and kindness. She was beautiful, strong, stubborn, caring, full of life, and she loved with her whole heart. She showed us how to live a full life no matter how short it might be, and she will be greatly missed by all who knew her. She was proceeded in death by her parents Jack and Patsy “Trish” Anderson, uncles Don Boulware and Ben Rue, aunt -Janette Rue, and godfather Dick Polen. She is survived by her husband Ed (estranged), son Ryan of Nashville, TN, sisters Sharon Anderson of Santa Fe, NM, and Karen (Tom) Anderson of Eagle Nest, NM, brothers Michael “Mike” (Kendra) Anderson of Akron, CO, and Charles “Chuck” (Lynnete) Anderson of Berthoud, CO, cousins Dawn (John) Boulware of Taos, NM, and Wayne (Colleen) Rue of Albuquerque, NM, sister in laws Brenda Croteau of Greeley, CO, and Kim (Randy) Weeks of Tucson, AZ, brother in law James Kelso of Missouri, several nephews and nieces, her very special “second” family -Norma, Lisa, Michael, Holly, and Amy Polen, and many other cherished and amazing friends. A celebration of life will be held on Monday, August 1, 2022 at 2:00 PM in the LifeBridge Church located at 10345 Ute Highway in Longmont Colorado with a reception to follow at the American Legion (Post 32) located at 315 S. Bowen Street also in Longmont, Colorado. A second Celebration of life will be held on Saturday, September 3, 2022 at 2:00 PM in the Montgomery Church of Christ located at 7201 Montgomery Blvd NE, Albuquerque, New Mexico. Jackie’s request was to have her ashes scattered in the Pacific Ocean. In lieu of flowers, donations can be made to the music program at Northeastern Junior College through the NJC Foundation, 100 college Avenue, Sterling, CO 80751, or The American Cancer Society.
See more See Less

In Memory Of Jacqueline Lee Kelso