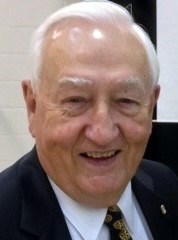 George W. Mitchell, Jr., passed away peacefully on Sept. 12, 2022, at Brookdale Meridian Englewood. He survived by his wife Sue, children Mark (Cindy Souders) and Kathy (Dave Garton), sister Peggy Wenrick (Bob), and many nieces and nephews and extended family. George was born in Sudbury, Ontario, Canada, on 1 April 1932. His parents, George W. Mitchell, Sr., and Pauline Alley Mitchell, had previously emigrated to Canada from Jerome, Arizona, where George Sr., a Colorado native, worked at the United Verde Copper Mine. George Sr.’s mining career took the family to the Frood Mine in Northern Ontario where George and his sister spent their early years. With the advent of WWII, the family moved in 1942 to Daytona Beach, Florida, where George’s grandparents had a resort home. At age 10 George spent many hours on the Florida beach doing a "coast watch" for German U-boats. He found none but knew his efforts succeeded because none surfaced out there. After a series of company moves, the family settle in Eureka, Nevada, where George graduated from high school in a class of 8. While there, he was proud to be a member the EHS Vandals Nevada State Small School championship basketball team in 1949. Upon graduation, George enrolled at the Colorado School of Mines, becoming the fifth member of his family to do so. At Mines, he an earned an Engineer of Mines degree, the equivalent of a Masters degree. In addition to his coursework, George participated in many extracurricular activities, including covering sports for the Oredigger student newspaper and serving as student manager of the Mines football team for three years, which earned him a varsity letter and letter jacket. He belonged to the Sigma Alpha Epsilon social fraternity, where he formed lifelong friendships, and was active in many other organizations, including Blue Key national honor fraternity, Sigma Gamma Epsilon honorary engineering fraternity, and Scabbard and Blade military honorary society. George graduated from Mines in 1953 as an ROTC Military Graduate. Just missing Korea, his active duty was deferred a year and in 1954 he entered the Army as a second lieutenant in the Corps of Engineers. While assigned to Ft. Carson, CO, he honed his skiing skills acquired at Mines and as a child in Canada. He practiced these skills at Camp Hale near Leadville. After his army service, George worked in mining for a few years, with his father at the Falconbridge Mine in Nevada followed by stints in Arizona and Ontario. Finding that hands-on mining did not suit him, he turned again to education, entering Stanford University in Palo Alto, CA, where he earned his MBA in 1960. Also in Palo Alto met Susan Arnold through friends. He and Sue were engaged in February and married in June 1960. The newlyweds took an extended honeymoon, traveling for 10 weeks through Europe in a new car picked up in Paris. The trip included a visit to George's family homeland in Scotland. Returning to their California home, Sue went back to teaching 2nd grade and George went into marketing for an electronics equipment firm. Shortly thereafter, children, Mark (1962) and Kathy (1964) joined the growing family. After 16 years in the electronics business in California, the School of Mines again beckoned in seeking its first ever full-time Director of Alumni Affairs. George answered the call and was chosen by the Mines Alumni Association to join the team that designed and implemented the $60 million program to support the expansion of CSM. After five years with Mines, the entrepreneurial bug bit George and, with his MBA, he became a financial services investment banker. He was associated with John Kinnard and Co. for many years in raising equity financing for a diverse group of small and medium sized firms. These included firms in oil and gas, computer software, medical devices, and hand-held computers, to name a few. These financing efforts raised over $100,000,000 for the client firms. He worked successfully in this business for 20 years until retiring in 2001. Again, harkening back to his volunteer spirit of service with Blue Key as a Mines student, George was happy to join a few other men in founding the Golden Rotary Club in 1986. In 2011 George was honored as the Golden Rotarian of the Quarter Century, and in 2021 he was recognized as a Founding Member of the club. George was also active in the Golden Toastmasters club, which he attended every week for many years. After attending Faith Lutheran Church in Golden for many years, in 2007 he and Sue became members of First Unitarian Society of Denver, where their daughter Kathy is also a member. You are warmly invited to join the Mitchell family in a celebration of George’s life on October 29, 2022, at 2pm, at First Unitarian Society of Denver, 1400 Lafayette St., Denver CO 80218. n lieu of flowers, please consider making a donation to Golden Rotary or the charity of your choice.
See more See Less